Back to People Overview
By admin on September 8, 2014 in Military Service, Minorities, Monuments, Riverside Families, Sports 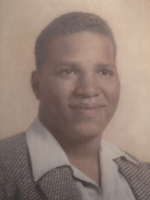 Albert Rowland, affectionately known as “Sonny,” was the only child born to Susie Watson and Albert Rowland, Sr. He spent his entire life in Riverside, receiving his education from the Riverside Unified School District and being gainfully employed by Hunter Douglas. He served in the U.S. Army during World War II.

After the war, Sonny returned to Riverside where he played baseball with the Dukes Negro baseball team. Sonny and his wife, Joyce Lawton, were the parents of Robin, Dennis, Michael, Jay and Terry. Sonny was respected and loved by all who knew him.