Back to People Overview
By admin on September 8, 2014 in Commerce, Civic Affairs, Military Service 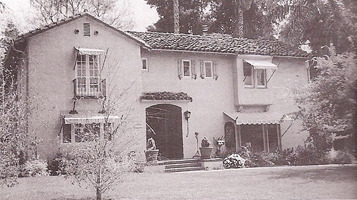 The home of Arthur N. Sweet

Arthur Newton Sweet was born in Sandwich, Illinois. When he arrived in Riverside in about 1907, he went to work for Charles G. Rouse at Rouse’s Department Store. In 1910, when an opportunity arose, he bought out Everett Brothers, and started Sweet’s Men’s Clothes. The store was known for quality men’s clothes and also for the giant free public scale that Sweet kept on the sidewalk outside the store.

The scale caught the attention of Ross Warner, a child abandoned by his mother at age 10, who had lived on the streets of Riverside for about three years. Ross dismantled the scale one day, probably in order to sell parts, and Sweet caught him in the act. When Sweet asked the boy to reassemble the scale, Ross did so and impressed Sweet with his mechanical abilities. Sweet took Ross home to his wife, Frederica, for a warm meal, and the childless couple took him in.

Sweet was instrumental in the establishment of March Field as a military base. In 1917, the U.S. Army had a hurried search underway for aviation training base sites. Sweet, as president of the Chamber of Commerce, put together a committee to help the Army locate and acquire a suitable site. A short-lived civilian flying center at the foot of Box Springs grade was home to a branch of the Aero Club of America, and the field had compiled a six-month record of weather with specific reference to flying conditions. This information showed that the area was more than suitable for a flight school.

Sweet’s committee recommended a location next to the Santa Fe Railroad’s Alessandro Station. In late November, Major Theodore A. McCauley and Sergeant Charles E. Garlick landed their plane at the site and, working with a group from Rockwell Field, San Diego, they established a landing strip and camp site for cadet training. The field was named the Alessandro Aviation Field and the Alessandro Aviation School was under construction by early 1918. On March 20, 1918, the facility was renamed March Field to honor Lieutenant Peyton C. March who had been killed in a training flight in Texas during February of that year.

Ross’s place in the Sweet’s affections was demonstrated when Ross took the last name Sweet about 1914. In addition to Arthur’s civic work with the Chamber of Commerce, he worked to assist boys in the community, including directing the Rotary Club’s efforts to reach out to unfortunate boys in the area. Arthur helped establish Camp Emerson, a Boy Scout camp in the San Jacinto Mountains and was very active with the Scouts, assisting in a large-scale search for a Corona Scout who was lost on San Jacinto Mountain in 1930. He was installed as president of the Riverside County Boy Scout Council shortly before he died in 1931.