Back to People Overview
By admin on September 8, 2014 in Government, Riverside Families 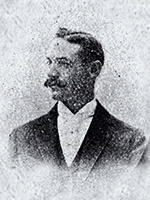 Charles Osborn Alkire was born on April 13, 1867 to Adam Stout Alkire and Rebecca Alkire, probably in Chicago, Illinois. The family lived in Illinois and Indiana before moving to California in 1882, joining Charles’s uncle James, who had arrived in November 1875.

He married Anne and lived in the family home at 3245 Orange Street in Riverside’s original Mile Square settlement until 1904. He was elected deputy county recorder of San Bernardino County and worked as Riverside’s deputy city clerk and assessor following his father’s retirement from that position in 1890. He held the office of chancellor commander in the Knights of Pythias Lodge.

In 1904, Charles Alkire left Riverside to pursue a career in politics in Los Angeles.