Back to People Overview
By admin on September 8, 2014 in Arts and Culture, Government, Minorities, Monuments, Riverside Families, Sports 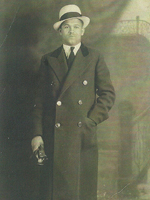 Errol Strickland was born in Rock Mart, Georgia. The family moved to Riverside in 1917. He graduated from Riverside Polytechnic High School in 1928. His education led him to a career in bookkeeping and accounting. His first position was as bookkeeper for two private contractors in the sanitation business. One of the contractors was an African American named Oscar Harris. He worked for Mr. Harris until the city of Riverside took over the business.

Errol was then hired as the first African-American supervisor of a Riverside city department. He was responsible for the daily operation of the City Sanitation Department. His staff consisted of approximately thirty minority employees. His career with the city lasted thirty years.

He was also very active in sports, playing baseball and coaching “the Dukes” a very popular Southern California softball team. The Dukes softball team was a real city attraction during the 1940s and 1950s, drawing large crowds to their games. Errol was also an outstanding golfer. He learned to play at the Victoria Golf Club while working as a caddy. He became one of the outstanding golfers in the National Negro Tournaments. He was a winner in the 1935 tournament in Chicago.

Errol loved music and enjoyed playing the bass. He played many dances in and around Riverside. He was a longstanding weekend performer at the Mt. Baldy Inn for nearly twenty years.