By admin on September 8, 2014 in Commerce, Government 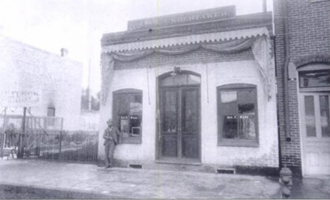 George F. Ward in front of his undertaking business on Main Street

George Ward came to Riverside in 1882 and started out as a carpenter and contractor. A downturn in the home building industry caused him to change careers and he became an undertaker, opening a business on the east side of Main Street between Mission Inn Avenue and University Avenue. His unusual storefront not only offered undertaking services but also sold artists materials, picture frames, and glass.

In August 1890, George married Frances Raymond. They had one daughter, Eunice. That same year, Ward succeeded James N. Keith as Riverside’s fire chief. From 1904 to May 14, 1907, Ward was a member of the Riverside board of trustees. He served until the May 14, 1907 election which passed a city charter for the town.