Back to People Overview
By admin on September 8, 2014 in Arts and Culture, Civic Affairs, Government, Law 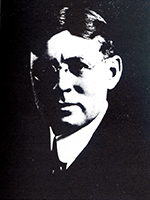 Herschel L. Carnahan was a Progressive Reform movement leader who, with California Governor Hiram Johnson, helped defeat the political machine associated with the Southern Pacific Railroad in the first decades of the 1900s.

Carnahan was born in Aledo, Illinois, and attended Monmouth College. As a reporter for the Chicago Record, he traveled widely throughout the south. Failing health brought him to Riverside for the climate in 1897. Upon arriving, Carnahan taught school for the first two years, then he joined the law offices of Collier & Evans. He studied law at the firm and was admitted to the bar in 1901.

Carnahan and Collier split off and formed Collier & Carnahan that same year. H. H. Craig joined them as a partner and the three continued legal practice together until Carnahan opened his own office in 1911.

Carnahan was involved in local politics and became chairman of the county Republican Central Committee. In 1910, he became president of the board of trustees of the Riverside Public Library, where he selected Joseph Francis Daniels as the city librarian. Within six years, under Daniels leadership and during Carnahan’s tenure from 1910 to 1915, Riverside had the second largest book collection, most sophisticated reference service, and best trained library staff in Southern California outside of the library in Los Angeles.

Between 1910 and 1913 alone, the library was selected to house 90 tons of federal agricultural documents (1910), contracted with the board of supervisors to serve as the Riverside County Free Library (1911), provided contract library services to Riverside County school districts (1912-1913), and established the first library trust fund and library service school (1912). County Superintendent of Schools A.N. Wheelock succeeded Carnahan as president of the trustees.

In 1914, Carnahan joined forces with Ethan Allan Chase, who established the Library Trust Fund, and they formed a committee with Frank Miller of the Mission Inn, S. C. Evans, J.R. Gabbert of the Riverside Press, and Gaylor Rouse of Rouse’s Department Store, to save the Citrus Experiment Station from closing.

Carnahan’s political activities grew over time, as did his friendship with a like-minded politician named Hiram Johnson. Both subscribed to the Progressive Reform movement, a group opposed to the Southern Pacific Railroad’s domination of California politics. When Johnson was elected governor in 1910, Carnahan assisted him by helping to dismantle legislation put forward by an “S.P. Boss,” named Gillis who had been named state librarian. Gillis’s plan was to bring all county libraries and library systems under the office of the state librarian, giving him control. Carnahan and Johnson lobbied to ensure that counties contract, wherever possible, with city library systems instead, ensuring the continued independence of municipal library systems.

Johnson chose Carnahan as his running mate in 1928 and Carnahan was elected lieutenant governor, serving with Johnson until 1931. In that position, Carnahan was an ex-officio regent of the University of California.