Back to People Overview
By admin on September 8, 2014 in Commerce, Government, Riverside Families 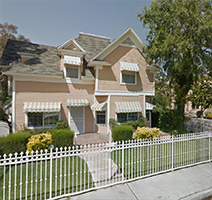 John Winship was an early lumber dealer and hand picked the wood for his Riverside home at Magnolia and Myers.

John Winship learned his trade at his first job in a Wisconsin lumberyard in 1879. He soon acquired his own lumber business, and in 1881, he and Elizabeth “Eliza” Woodard were married. Over the following years, John and Elizabeth had five children and the family, on vacation in 1900, visited Riverside. Taken with the community, they decided to move and purchased an orange grove on Magnolia Avenue near Harrison Street. Soon after, in 1903, Winship established the Arlington Lumber Yard on the property.

In 1906, the family built a new home a very short distance away at Magnolia and Myers Street. The broad front porch and dormers of the Queen Anne Victorian faced Magnolia Avenue. Winship traveled to Wisconsin and hand-selected the wood for the interior trim, choosing curly birch for finishing details, cypress for the window frames, and oak and mahogany for the floors. Soon, Winship moved the lumberyard to a lot next door on Myers Street.

The Winships lost two children soon after their move. Son, Harry, died in 1905 and a baby died in 1908. John Winship erected a fine monument at Evergreen Cemetery for the family plot. Winship copied an inscription author Mark Twain had adapted for use on the grave of his daughter, Susan Clemens, when she died at age 24 in 1896. The poem was derived from a verse originally by poet Robert Richardson:

In 1910, John’s son, Frank, joined him at the lumberyard and eventually took over. In 1917, John was elected to the city council in Riverside. He served eight years representing Arlington.

Later owners rotated the house to face Myers Street, removing the porches and replacing the foundation. For several years they operated a family restaurant called “The Evergreens,” on the main floor.