Back to People Overview
By admin on September 8, 2014 in Agriculture-Citrus, Arts and Culture, Civic Affairs, Commerce 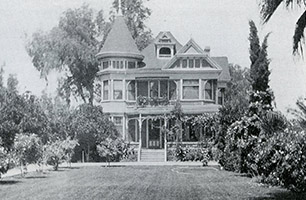 Pember lived in this house, owned by his father-in-law, Milton J. Daniels

Pember S. Castleman was born in Morrisburg, Ontario, Canada in 1871. He was brought to Riverside by his parents in 1884. His father, John S. Castleman, bought citrus property on Magnolia Avenue and became a director of both the First National Bank of Riverside and the Riverside Savings Bank and Trust Company.

Castleman, with fellow Riversiders L.V.W. Brown and Clarke Whittier, became a member of the first class at Stanford University. There he distinguished himself as leader of the Stanford Glee Club and composed “Rush the Ball Along,” Stanford’s first football song, for the university’s first intercollegiate football game with California (Berkeley). He went on to law school at Columbia University and joined a major law firm in New York. In 1896, he married Maude Cecelia Daniels.

Returning to Riverside, Castleman went to work at The Daily Enterprise, one of Riverside’s daily newspapers. His father-in-law, Milton J. Daniels, had purchased an interest in the paper in 1899. Milton Daniels had come to Riverside for health reasons in 1890, a retired Civil War captain; former president of the Union National Bank in Rochester, Minnesota; and a former Minnesota state senator. In Riverside, Daniels pursued the same interests and was elected congressman and also became president of the Orange Growers Bank.

While at The Daily Enterprise, Pember found himself engaged in one of Riverside’s most notorious scandals, the 1903 failure of the Orange Growers Bank. The bank failed as a result of embezzling by its cashier and a prominent member of Riverside society, Tom Hays, a close friend of Daniels. Despite The Enterprise’s support of Daniels and pro-Hays stance, as the scandal unrolled Daniels’ political career was finished. He went to work with Pember, in his real estate and insurance business. The family lived together in Daniels house at 5809 Brockton.

Pember’s love of music persisted in his community activities. He was known for continuing to compose and sing with the Cantadores of Riverside until his death in 1942.