Back to People Overview
By admin on September 8, 2014 in Agriculture-Citrus, Arts and Culture, Famous 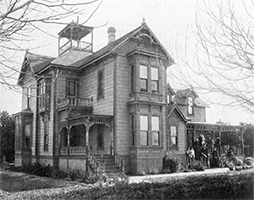 After her husband died, Sarah Battles continued to farm the orange groves at this Riverside home on Bandini Avenue

Sarah Battles was named for her grandmother, Sarah Webster, a second cousin of Massachusetts Senator Daniel Webster, who later became Secretary of State. Sarah first met Daniel Battles at the academy they both attended in Farmington, Maine. Daniel married another woman, but after she died leaving him a widower, he married Sarah in 1868.

Sarah and Daniel had four children. Nellie May and Fred Arthur both died in infancy. Foye D. served as a sergeant in the Spanish American War from May to December 1898. Lillian was the youngest of the four.

When Daniel died in 1895, Sarah took over the family’s 10-acre citrus ranch on Bandini between Brockton and Magnolia Avenues. She was a successful citrus grower and was active in the community, participating in the Methodist Episcopal Church and the Order of the Eastern Star.

Sarah Battles kept an extensive diary for two decades, 1874 to 1894. She used the diary to document items from local newspapers, weather, births, deaths, land sales, business developments, and new construction. A transcript is in the Local History Collection of the Riverside Public Library.