The new gates of Evergreen were designed by Forrest Carl Fowler. Born in 1914, Fowler graduated from the Otis Institute of Design. He worked as a designer for architectural firms and retailers until his World War II service from 1942 to 1946. After the war, he settled in Riverside. Fowler assisted the Riverside Metropolitan Museum, both as a volunteer and as staff, serving as a restoration specialist. His work was critical to the restoration of Riverside’s Bettner-McDavid House, also called the Heritage House. Fowler’s work was recognized by the Old Riverside Foundation and the California Council of Historical Societies. 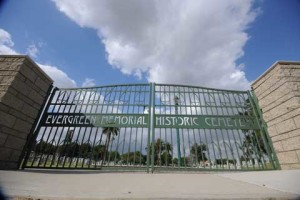