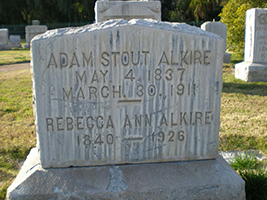 Born in 1837, Adam Stout Alkire started out in Pickway County, Ohio. He fought in the Civil War battles of Pea Ridge and Cotton Plant, Arkansas; the Siege of Vicksburg; and finally in several engagements under General Butler’s command in the Army of the James. While in the military, he married Rebecca A. Little. On July 2, 1864, he was injured in a battle at Deep Bottom, Virginia, and lost his leg. He was honorably discharged in March 1865.