Back to People Overview
By admin on September 8, 2014 in Minorities, Monuments, Religion, Riverside Families, Sports 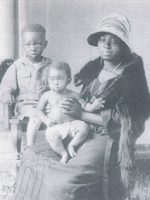 Adella Russell, formerly Adella Blackburn, was born in Berry Station, Alabama. Her mother died at an early age. She and her brother, Cleveland, were reared by their Aunt Anna Bell Hughes in Ft. Gibson, Oklahoma. Adella married Harry Russell from Corsicana, Texas. They moved to Indio, California, in the early 1920s. In the early 1930s, they moved to Riverside. She and her five children: Loreena Mae, Anna Mae, Christine, Eva and Floyd were faithful members of the AME church.

Though Adella died at age 45, her children and grandchildren became teachers, professors, businessmen and women, and ministers. Her grandson, Johnnie B. “Dusty” Baker, became a well-known professional baseball player and coach. Her legacy lives on through them: “Put God first, stick together as family, get an education, do something positive with your lives, and help someone less fortunate than yourself.”