By admin on September 8, 2014 in Civic Affairs, Commerce, Riverside Families 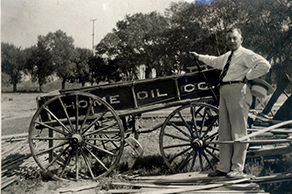 Albert Younglove shown here with a wagon from his Home Oil Company.

Albert followed in his father’s footsteps in the oil business. He formed Riverside’s Home Oil Company, the second local oil company. He sold petroleum products in almost 50 stations throughout Riverside and San Bernardino Counties. He also started the Home Oil Company in Anaheim.

In 1901, Albert was one of the group of investors who formed Riverside’s first hospital. Dr. C. Van Zwalenburg had organized a meeting of local doctors at his home on December 5, 1901, and they agreed to go ahead and raise funds of $25,000 to capitalize the venture. After the stock was sold, the subscribers met to form the corporation on August 1, 1902. While the doctors were investors and agreed to serve as advisors, they wanted business people to run the association. George Frost was elected president and Albert Younglove, George Reynolds, George Bittinger, and Lyman Evans were elected directors of the Riverside City Hospital.