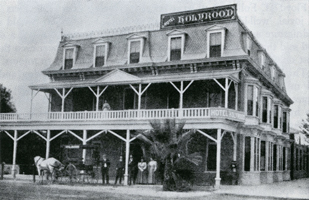 The Hollyrood Hotel was built as a sanitarium by Anne Whittier’s husband, Dr. Clarke Whittier, but was operated instead as a hotel.

Anne “Annie” (McKenzie) White Whittier was born in Scotland and immigrated to Canada where she married and had a son, Wilmot White. On November 15, 1883, Anne became the third wife of Dr. Clarke Whittier in Riverside. The couple had what amounted to an early form of pre-nuptial agreement. The day before their marriage, Dr. Whittier signed over to Annie the property known as Whittier’s subdivision, an area bounded by University Avenue, Market Street, Tenth Street, and Chestnut Street. Annie agreed in return to have no claim on any future property Dr. Whittier might acquire.

Annie’s first home faced University Avenue, near the corner of Fairmount. When her husband died, Annie began to develop the Whittier subdivision, creating several streets including Whittier Place and Hidalgo Place. In 1889, legal steps were taken to make the park site the property of the city of Riverside and the park was named after Albert S. White in 1909. In about 1893, Annie built a new home on the corner of University and Chestnut.