Back to People Overview
By admin on September 8, 2014 in Monuments, Minorities, Riverside Families 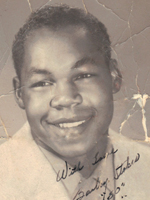 Bailey L. Stokes was the older of two sons born to Maitland and Thelma Cora “Peggy” Stovall Stokes. He graduated from Riverside Polytechnic High School with the class of 1950. On November 10, 1951, he married Alma Patterson and moved to Los Angeles. At his death he left a legacy that perpetuated his name and memory in his children and grandchildren.

Myla Stokes Kelly, a librarian, attended the April dedication of the monument to African Americans buried at Evergreen. She said, “It was breathtaking and poignantly beautiful to see the restoration of the Evergreen Memorial Historic Cemetery, the final resting place of the majority of the Stokes family. My dad, Bailey L. Stokes, was buried there in 1962, when I was only ten years old. In 1989 we buried my grandfather, Maitland Stokes, there, placing his ashes on top of my dad.” Maitland’s father, Myla’s great-grandfather, David Stokes came to early Riverside at the invitation of his uncle Robert Stokes. David lived to age 77 and was buried at Evergreen in 1943. Robert Stokes was buried in 1904.