Back to People Overview
By admin on September 8, 2014 in Arts and Culture, Government 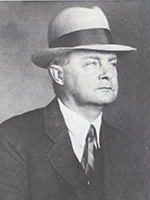 Charles F. Woods became Riverside’s city librarian in 1922, succeeding Joseph Francis Daniels who had held the position during a period of expansion under Herschel Carnahan, president of the board of trustees.

Unlike the Daniels-Carnahan years, Charles F. Woods was plagued by political and fiscal conservatism after accepting the post and arriving from the San Jose Free Public Library. His initial optimism, expressed by his description of Riverside as the “best library city in the State of California,” continued to be undermined as the city council lowered the tax levy for the library in 1926. Woods and the entire board of trustees resigned. Mayor John T. Jarvis appointed a strong group of library advocates who renegotiated the levy and reinstated Woods.

Woods established “book stations” in Casa Blanca and at the Community Settlement House in Riverside’s Eastside in 1926. Woods had hired the first children’s librarian in 1925 and in 1930, the children’s room at the library evolved into a separate building, occupying Humphrey House, next door to the Unitarian Universalist Church. That same year, however, the fiscal realties of the Great Depression came home and the library lost almost half its public funding.

From 1929 through 1932, library use increased dramatically, despite the constraints on service. Woods explained the change in the 1932 annual report for the library, saying, “It should be remembered, that in hard times the library is a solace to the unemployed, a release to the discouraged, and an encouragement to those still hopeful.”

While Woods’ successes at achieving his personal goals: an innovative library program for Riverside’s public schools and an upgraded the library service school, did not last; the changes he brought to the library as a whole transformed it from a cultural hobby for Riverside’s educated class to a “public service agency, reaching out to a diverse and democratic clientele.”