Back to People Overview
By admin on March 24, 2016 in Architecture, Civic Affairs, Medicine 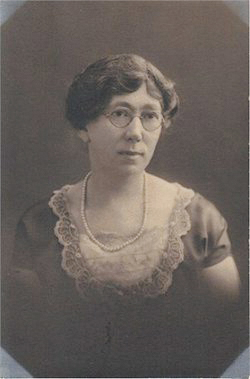 Born in Scotland, Annie Ross immigrated to the U.S. in 1886 at 13. She became an Osteopathic physician and practiced in Los Angeles until she moved to Riverside in 1918. She cared for Riversiders from her office in the Loring Building on Mission Inn Avenue (then 7th Street) until her death in 1936.

Annie Ross expressed her caring nature both through her work at Calvary Presbyterian as head of the Women’s Missionary Society and also through the YWCA. The only woman to serve the YWCA as both president (1920) and as general secretary (1922-1931), she was instrumental in the construction of the YWCA building at 7th and Lime Streets, designed by Julia Morgan.

Built in 1929, the building is a unique landmark of Mediterranean and Classical revival styles. Originally, the first floor housed an indoor swimming pool, gymnasium with stage, and an entrance lobby that faced an open atrium garden. The second floor contained bedrooms, offices, and a versatile meeting room. Concealed stairs led to a roof garden with an outdoor fireplace, an expansive view of downtown, and ample space for badminton. After 40 years as a YWCA, the building became the Riverside Art Museum.

Ross also helped create Camp Asrama, near Crestline. A huge tree at the camp was dedicated to her with the words, “As this tree stands a sentinel watching over our camp, so Dr. Ross, as the great sentinel of our association, watches over the welfare of the girls and women of our city.” In addition to the YWCA, Dr. Ross was instrumental in the organization of the Riverside Zonta club and served as its first president.