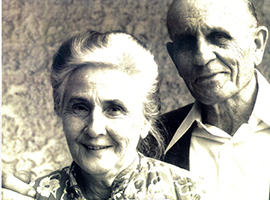 Born in a town named for his grandfather, Fallon, Nevada, Ira was a boy when he met his future wife, Lucille, in a one-room school. They grew up, married, and ranched near Reno, Nevada.

Ira’s grandfather, Mike, had been a prosperous businessman, owning a ranch, store, and post office where he served as postmaster. When he retired in 1918, Mike and his sons came to Riverside. They bought land near the Santa Ana River. Spring Brook, an artesian stream, ran through the property. Mike grew alfalfa on the land.

When Mike died in 1924, his sons inherited the property and decided to create Riverside’s first public golf course. Ira, Jr., and Lucille were summoned to develop and operate the course, which opened Memorial Day 1936. A flood in 1938 severely damaged the course and clubhouse, but Ira rebuilt and continued his operations until he sold the course to the Mission Inn in 1945. Ultimately the city of Riverside came to own the course.