By admin on September 8, 2014 in Agriculture-Citrus, Architecture 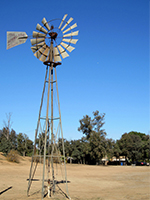 John Bronislaw Chudzikowski came to the U.S. from either Poland or Czechoslovakia as a young man. Chudzikowski’s ideas of self-sufficiency and sustainability seemed, perhaps, more eccentric in the early 20th century than they do today.

Chudzikowski’s home was approached through a monumental arched gate in the same Mission Revival vernacular style as the house he built. Rock-quartz stonework, walls, planters, plazas, and steps joined the house to other buildings and the gardens.
The property was completely self-contained with concrete lined reservoir, windmills to pump water from two wells, terraced gardens of fruit and ornamental trees, and an extensive garden which not only provided his food, but also generated income from sales.