By admin on September 8, 2014 in Agriculture-Citrus, Civic Affairs, Commerce, Government 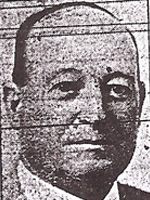 John “Jack” Elwood McGregor came from a farming family in Nova Scotia, Canada, and followed his parents to California in 1893.

McGregor and Henry W. Fletcher opened the Glenwood Saddle Livery at 650 Market Street in 1906 and Jack purchased other Riverside County properties, including the Iron Chief Mines at Eagle Mountain, which he later sold to Kaiser Steel. He also conducted large scale farming operations in the Ethanac area.

His civic-mindedness and interest in agriculture led McGregor to participate in establishing the Riverside County Fair, later known as the Southern California Fair, on fairgrounds near Fairmount Park.

Jack McGregor was elected county supervisor for the third district in 1924, reelected twice, and then made chairman in 1935.

Profession: President, Board of Supervisors