By admin on September 8, 2014 in Agriculture-Citrus, Commerce, Riverside Families 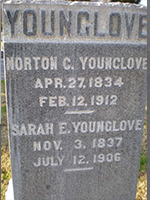 Norton Clizbe Younglove moved to Riverside in 1892 and in the city directory of 1893, he was listed as a horticulturist living on Brockton Avenue.

In addition to growing citrus, Norton was involved in the oil business. He, and a consortium of other businessmen, purchased 640 acres in the Bakersfield area and formed the Aetna Oil Company. The directors were J. R. Johnson, president; S. Masters, vice–president; R. W. A. Godfrey, treasurer; Shirley C. Ward, director; and Tom Hays, secretary. The venture prospered and the company, capitalized at $640,000, soon held land that alone was valued at $2 million.