Back to People Overview
By admin on September 8, 2014 in Civic Affairs, Religion 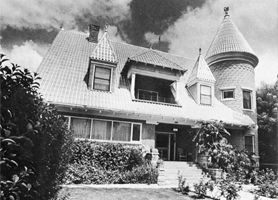 The Irvines built this French Chateau-style home on Brockton Avenue

Stella Irvine moved to Riverside in 1893 with her husband, Lew, and bought an existing orange grove that occupied three city blocks between First and Fourth Streets and Locust Street and Brockton Avenue. Lew traveled as a hardware salesman for the Alfred Field Company and Stella was very active in the Women’s Christian Temperance Union.

They built an impressive French chateau-style house on the corner of First Street and Brockton Avenue. The 16-room home was designed by Seehorn & Preston in Los Angeles and featured a shiny zinc roof and a circular tower complete with fleur-de-lis finial.

When the house was complete, the Irvines held a grand reception to celebrate both the home’s completion and their 25th anniversary. The enormous living room extended the entire width of the house and was decorated with hand painted Art Nouveau designs above wood paneling. Guests entered into a large entertainment area divisible into eight separate rooms using sliding doors. Set into one window was a memorial portrait of the Irvine’s daughter, Lucille, who had died as an infant. Her high chair was placed below the portrait as a remembrance. The Irvines called the house Stel-Lew-Vine, incorporating the family names.

Mrs. Irvine converted the four attic servant’s bedrooms into offices for her temperance and church work and set up a small print shop in the basement to publish religious publications distributed worldwide.

After the house was sold in 1938, an incident of purported haunting took place. A little girl, presumably Lucille, is said to still haunt the house and can occasionally be heard crying.