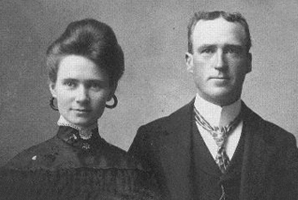 Flaherty tried his hand at various business ventures. He was a fruit packer for Oscar Ford, a retail clerk for E. Michellbucher, a partner with E. M. Kaufman in a retail oil business, and then, with his finances secure, he purchased an orange grove. In 1905, Tom was appointed collector for the Riverside Electric Light Department, and in 1908, he became circulation manager at The Enterprise.

Flaherty opened his own real estate business soon after, and his civic-minded pursuits included the city of Riverside Public Utilities Committee. He was secretary of the Johnson Wallace Club and the Republican Central Committee. He joined other realtors to form the Riverside Realty Board, where he served as president. At the state level, he was vice president of the California Real Estate Association. His real estate success created the groundwork for another business venture—insurance. He established Patterson & Flaherty, an insurance icon in Riverside for many years.

Flaherty’s home, built in 1922, was designed by Riverside’s most prominent architect, G. Stanley Wilson. The home, at 3498 Ramona is beautifully preserved. Tom also partnered with his son, Tom “Chauncy” Flaherty, to operate The People’s Finance and Thrift Company—Real Estate Loans and Investments. Chauncy, in 1934, purchased the former home of William B. Clancy, the first of the row of bankers’ homes on Mount Rubidoux Drive.