Back to People Overview
By admin on September 8, 2014 in Arts and Culture, Civic Affairs, Commerce 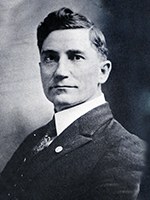 Poet, merchant, and postmaster, Wilbur Ayers was born in 1874. He was the grandson of Samuel Ayers, an associate of John Brown and his sons in the anti-slavery “border wars” in Kansas. His father was William H. Ayers, a private in Company M of the 15th Kansas Cavalry during the Civil War.

Wilbur attended public school, then normal school, and became a teacher. In 1897, he moved to Albany, Oregon, where he worked in the woolen mills for a year before moving to San Francisco in 1898. In San Francisco, he went to work for the American Tea Company, taking charge of the company’s Riverside branch. This connection caused him to move south, and he settled in Highgrove where he was appointed postmaster. In Highgrove, he became superintendent of the Methodist Episcopal Church Sunday School as well as secretary and treasurer of the Highgrove Improvement Association. On December 25, 1901, he married Stella Stephenson, with whom he had four sons,

Wilbur Ayers’s vocation was poetry. He was involved in civic affairs in Riverside and his best known poem, “Riverside, My Riverside”, was used widely at civic functions and, set to music, was sung at meetings of Riverside’s Present Day Club. Ayers was also a member of Riverside Lodge 282 of the Independent Order of Odd Fellows.

I know a city wondrous fair
Where orange bloom perfumes the air
And birds are singing everywhere
Riverside, My Riverside

He was the author of Dreams of a California Poet, which achieved statewide circulation, and was known for theme that included praise for California, opposition to tyranny, and religious subjects. On August 19, 1909, Ayers suffered a grievous injury when he crushed his right arm stepping off a train in Highgrove.