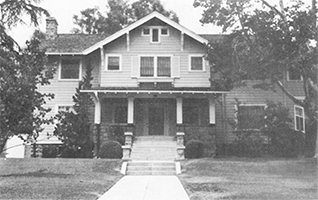 William Clancy began his career at age 21, taking a job with the Banning Light and Water Company in 1889. Four years later, when Riverside County split away from San Bernardino County in 1893, Clancy was elected the first county auditor. He moved to Riverside and served three terms before resigning in 1903 to join the newly formed Citizens Bank. In 1904, the bank opened a branch in Arlington and became a national bank, Citizens National Trust and Savings. Clancy succeeded Stephen H. Herrick as president of the bank and also became vice president of the Security Savings Bank.

In 1908, William and his wife, Alice, purchased a lot on Little Rubidoux and built a home on Mount Rubidoux Drive, becoming the first of several bankers to live on what became known as “Banker’s Row.” Architect Lester S. Moore designed the home and Hiram L. Travers & Sons was the builder.