By admin on September 8, 2014 in Law, Military Service 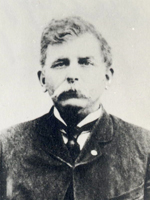 William B. Johnson began his career in the military, enlisting in an Iowa battalion of the U.S. Army during the Civil War. He was part of General Sherman’s March to the Sea and was wounded twice. He continued his army career when the war ended, serving as a scout and wagon master.

In 1892, Johnson moved east and, in 1893, was elected the Riverside County’s second sheriff. Two years later, he moved to Riverside and took the office of the city’s first chief of police.