Back to People Overview
By admin on September 8, 2014 in Famous, Commerce 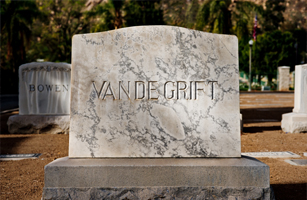 Jacob Van de Grift was the brother-in-law of author Robert Louis Stevenson, who had married Jacob’s sister Fanny. Considered a leading citizen, Van de Grift was a member of the Rubidoux Club, Riverside’s finest men’s club. The year the club moved into its second floor quarters in the Rubidoux Block at Main Street and Mission Inn Avenue, Jacob was on the Board of Directors with C. H. Keys (president), Charles Loring, Frank Miller, Orrin Backus, H. Bordwell, H. Monroe, M. J. Twogood, Albert S. White, Charles T. Rice, John S. Castleman, Robert D. Osborn, A. C. Willard, and, most importantly, Tom Hays, who later was charged with the embezzlement that led to the failure of the Orange Growers Bank.

Van de Grift was implicated in the corrupt land dealings revealed by the Los Angeles Times that first cast suspicion on Hays in his role as cashier of the Orange Growers Bank. At Hays 1906 trial for the railroad fraud, Van de Grift testified that Hays “had organized a pool to buy right-of-way property [for the Salt Lake Railroad]. These agents were to secure property from the owners at a low price, then add on as high a ‘commission’ as possible, and the sellers were to sign two receipts. One receipt was for the original price and the other included the ‘commissions’ in a pool which went, half to [Hays] and one-eighth each to the four real estate men.”

The Los Angeles Times followed the case and named Van de Grift along with W.W. Wilson, B. B. Bush, and Frank A. Tetley as the four real estate men who profited.