Back to People Overview
By admin on March 24, 2016 in Arts and Culture, Civic Affairs 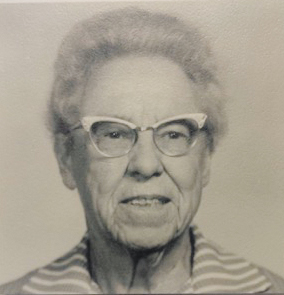 Josephine Van de Grift Nielsen was the daughter of Riverside pioneers Jacob and Clara Van de Grift and widow of citrus and avocado grower Alvin J. Nielsen. Jo was a water colorist and worked in enamel, graduating in art from UC Berkeley in 1919. Her work was recognized in 1959, when she was included in an exhibit of 83 artists at the Museum of Contemporary Crafts in New York.

Jo was also committed to her community, serving on the Girl Scout Council, the American Association of University Women Art Guild, the California Water Color Society, and the Riverside Junior League. She was a member of the Pioneer Historical Society, Riverside Museum Associates, Friends of the Mission Inn, Riverside Art Association, and the Riverside Congregational Church.

In 1973 at age 77, Jo took a three-week group painting tour to Tahiti and New Zealand under California artist Millard Sheets. Jo’s aunt, her father’s sister Fanny, had married author Robert Louis Stevenson, who lived the last five years of his life in Samoa. While in the South Seas, Jo decided to go to western Samoa to visit Fanny and Robert’s tomb. From the house on Vailima, where Stevenson did most of his writing, Jo climbed the rugged trail through the jungle to the tomb on Mt. Vaea’s summit. There she discovered thieves had broken in and stolen Fanny’s ornate bronze marker, an intertwined Samoan hibiscus and a tiger lily, her Aunt Fanny’s favorite flower.

Jo returned home determined to replace the marker she remembered from her aunt’s San Francisco funeral when she was 18. Finally she found a photograph and duplicated the bronze with assistance from the Riverside Monument Company. She shipped it to Mike Field, editor of western Samoa’s government newspaper, who in August 1978 had it affixed alongside Stevenson’s marker. Faithful to the original, it reads:

A fellow wayfarer through life,

The august Father gave to me.