By admin on September 8, 2014 in Agriculture-Citrus, Colonists, Commerce, Military Service 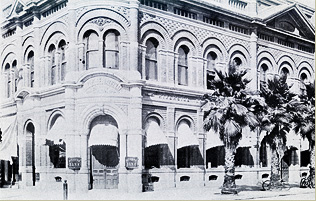 Perry Cover was a director of the Citizens National Trust & Savings Bank, the bank that took over the liabilities and the assets of the Orange Growers after it failed as a result of embezzling by Tom Hays.

While not a colonist himself, Perry D. Cover came to Riverside in the footsteps of his brother, colonist Thomas W. Cover.
Born in Richland County, Maryland, Perry Cover served during the Civil War was on duty at Harper’s ferry during Robert E. Lee’s entry into Maryland in 1862. After the war, he came west to San Francisco and then to the mining districts of California and Nevada. He was with his brother Thomas, when Thomas staked one of the first five claims, striking gold at Alder Gulch (later called Virginia City), Montana.
Cover has a career as a merchant in Kansas and Chicago. His wife’s poor health led him to come to southern California in the spring of 1874, buying 20 acres south of Jurupa Avenue and establishing himself as an orange grower. In 1877, his wife Mary died. She is also buried at Evergreen. In 1882, he married Mary’s sister, Julia.
In 1884, his brother, Thomas, disappeared prospecting for gold in the Borrego Valley. Perry sold the balance of his land, building a house at the corner of Orange Street and University Avenue. He joined forces with J.D. Sebrell to open a drugstore on Main Street under the name Sebrell and Cover.
Cover’s business dealings were widespread. He was a director of the Eighth Street Improvement Company, builder of the Arlington Hotel, was a founder and President of the Mound Land and Water Company which purchased 500 acres and founded a town that became Loma Linda.